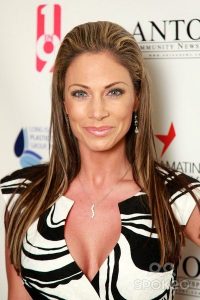 Nicolini was born in Farmingville, New York. She graduated from Sachem South High School in 1996 and attended Stony Brook University for one year. In 1997, Nicolini joined WBLI Radio in Long Island. In 2000, she began working on her bachelor’s degree in Communication Arts at the New York Institute of Technology while reporting for LI News Tonight. In 2001, she became the arena announcer for the New York Islanders and a dancer for the New York Dragons Arena Football team. Nicolini soon became an on-camera traffic reporter at Long Island’s Metro & Traffic and Weather Channel and News 12/Long Island.

She also participated in the 2003 Fox reality television program Married by America;[2] she won the show but didn’t get married. In August 2006, it was reported[citation needed] that she would be one of the women trying out to become a Pussycat Doll. Before becoming a reporter, Nicolini made her living as a model. She tried out unsuccessfully to become the official live-action model for Vampirella in 2001. She had bit parts in four feature films and six TV shows, including HBO‘s Sex and the City and NBC‘s Law & Order.

From 2004-2011, Nicolini was at WPIX as the weekday morning traffic reporter.

Nicolini joined WNYW Fox 5 in 2011 as Entertainment Reporter. Previously, she was the Traffic/Entertainment Anchor on the PIX11 Morning News since 2004. In addition to delivering the traffic (often from the helicopter Air 11), Nicolini interviewed top celebrities in the entertainment industry. She also served as fill-in anchor, weather anchor and feature reporter.[4]

At WPIX, she and Marvin Scott spent Christmas holidays in Iraq in 2009 and 2010 with local servicepersons to help reconnect the troops with their families back at home live via satellite. In continuing her goodwill mission, in 2010 she spent the holidays in Norfolk, Virginia with the Navy where she reported live and reunited sailors with their loved ones. She is actively involved with several charities, including: John Theissen Children’s Foundation, Little Shelter Animal Rescue, Alliance for Lupus Research, PETA, The Juvenile Diabetes Foundation, The National Institute of Natural Sciences, and The Arthritis Foundation.

In October 2014, Nicolini announced that she was pregnant with a baby boy.

As of October 2017, Jill can be heard reporting traffic on 1010AM WINS Radio.

THE DIFFERENCE BETWEEN SELLING AND CLOSING

Attention all auto dealers, general managers, and sales managers! You are invited to Richie Bello’s Cigar Dinner at the Beach Club Estate on May 9th, from 6-10pm!

There will be an exclusive  buffet, complimentary cigars by Village Cigar Headquarters, and a cash bar!

This is a great opportunity for every auto dealer to motivate your staff, just in time for this year’s upcoming selling season! Money is not the only motivator in the automotive sales business, your employees need to be motivated on a more engaging level in order for them to achieve the results that your dealership needs. RSVP by April 30th, by calling (631) 578-9018!

Stan Sher Is Our GUESS Speaker for this EVENT